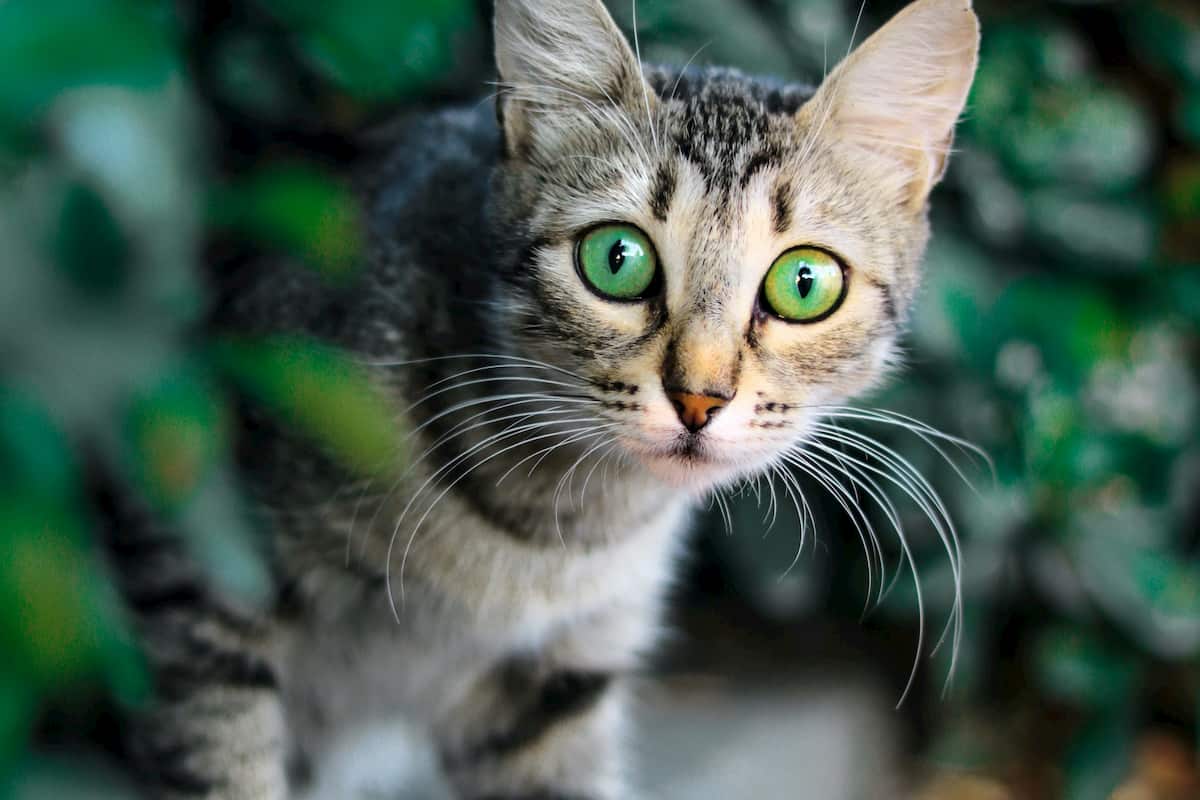 Tigers, lions, and leopards are not only exotic but they share a particular kind of beauty that can only be displayed in ferocious felines. Many have yearned to have such types of animals at home, however, it often results in a bad experience as wild cats can not be domesticated and kept as pets. Due to this, there has been a high demand for tiger looking cats that are ferocious in looks but gentle enough to keep as domestic cats.

Tiger looking cats are much different than your normal short hair or domestic pets. Many do not even have tiger looking cats in their homes as they’re far too expensive for most. Those that do, are able to give special attention and care to these ferocious-looking yet sensitive felines.

Tiger looking cats need special care and attention as they can be a handful if not gentle. These cats also need to be properly trained so be sure to have time on your hands if you’re thinking of getting any one of these.

Let’s have a look at some of the tiger looking cats, their history, and personalities. 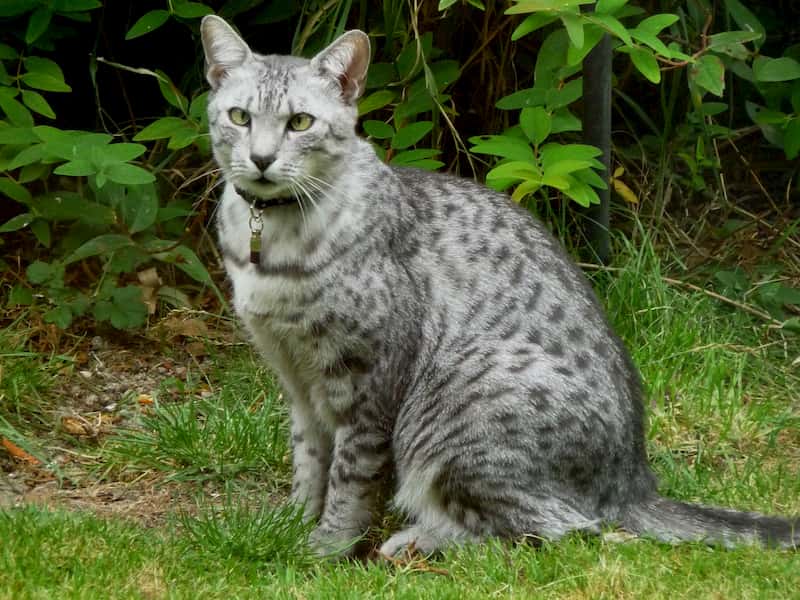 Considered to be one of the fastest domestic cats that can record speeds up to 30 miles per hour, the Egyptian Mau is an extraordinarily beautiful cat and the only one with a naturally spotted coat.

Recognized by The International Cat Association (TICA) in 1979, the Egyptian Mau descended from a line of small African wild cats and were thought to have originated in Egypt. Ancient artworks found in Egypt give evidence that these cats first showed up in Egypt as it’s the only cat with a spotting pattern. Selective breeding of this type of cat started in the 1950s with imports coming to the United States all the way from Italy.

Egyptian Mau is a one-person cat meaning it has a reserved personality and is affectionate to its owners but not so much with other people. This breed is a gentle cat and needs to be socialized. The Egyptian Mau is not very confident and mostly shy however is very athletic and likes vertical space. It is highly intelligent as it spends its time observing so if you see drawers open in your house or doors too, know that it’s the cat. This tiger looking cat wags its tail like a dog to communicate pleasure. Keep a few toys around to keep it entertained. 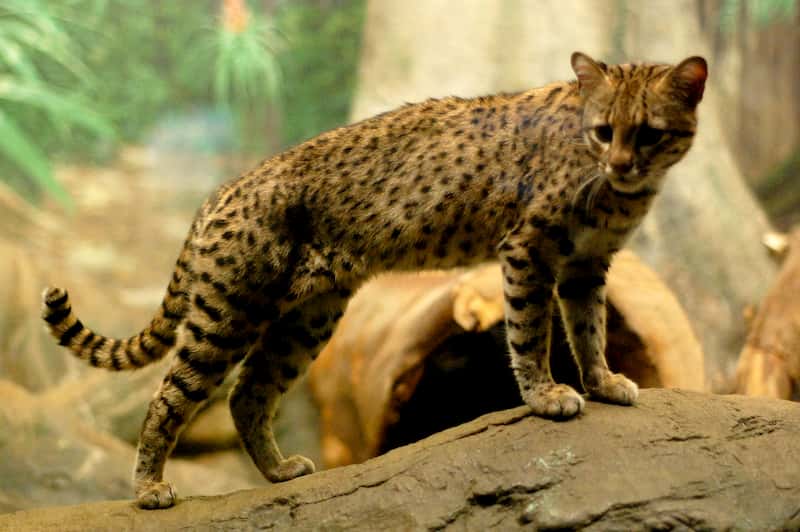 Geoffroy cat, although a small wild cat, is definitely a tiger looking cat and perhaps acts like one as well. You might think that it’s a cub of a wild feline at first glance, however, the Geoffroy doesn’t grow any larger than 24 inches.

Identified in the 1960s, the Geoffroy cat can be found in central and south America. These cats were hunted almost immediately all the way to the 80s for their natural colored spotted pelts. Legislations were introduced to ban the hunting of such animals and now the Geoffroy cat can be spotted across certain regions of America in abundance.

Geoffroy’s cats are considered to be night hunters and hunt alone instead of in groups. It only joins with other cats only during mating seasons. This tiger looking cat demonstrates a highly unusual behavior by using its tail to support itself so that it can stand on two feet and scan its surroundings. The cat does not like climbing trees and can be found mostly on the ground.

If you love small cats, you should definitely check for the smallest breed of cats. 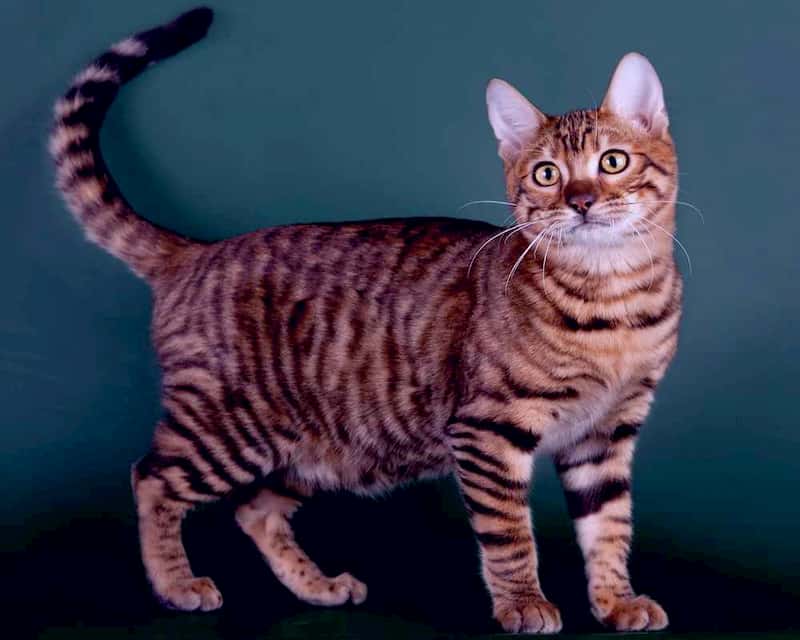 Ussuri is a tiger looking cat that is very rare as its breeding is done completely naturally. A cross between different species of amur cats, Ussuri are not very good domestic pets when compared to others on this list.

Not much is known about Ussuri cats except that they’re thought to have originated in the amur river area of Russia. This area can be found in the amur forest and the reason for that is that it is believed that Ussuri cats came out of natural selection. It is said that amur leopards of the region must’ve mated with domestic cats in the wild resulting in such a remarkable and extremely rare creature.

Since they are mostly found in the wild, these tiger looking cats do not prefer human interaction. However, it is known that they are able to develop bonds with a single human over time. They have an instinct to hunt hence they aren’t considered to be the best of pets. People with small homes can find that an outdoor run for Ussuri cats can help them destress. They do bring their hunts back home and share them with their owners, so do expect surprises if you have this little one roaming around the house. 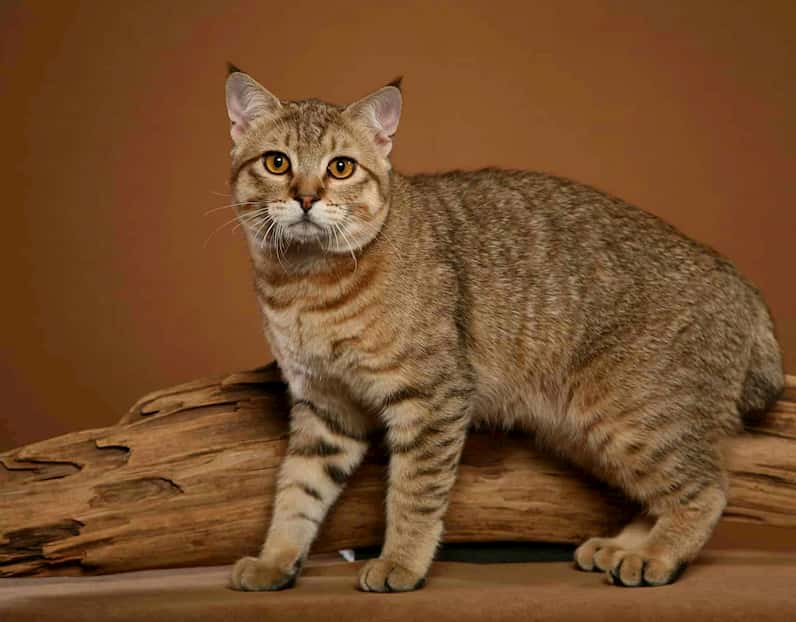 Pixiebob cats have spotted fur and an unusually short tail. This gives them a unique look making them desirable as home pets. These cats do share some looks with tigers as they can be intimidating at times, however, they are one of the gentle ones from this list.

Pixie-bob, from the name of it one can guess, is a result of a cross between a shorthair domestic cat with a bobcat. It is said that the mating process was a natural mating process meaning it wasn’t an experiment, unlike many tiger looking cats. It is believed that a woman named Carol in 1985 took in an unusual-looking male kitten that mated with the neighbor’s female cat. Of all the offsprings produced, one seemed highly unique with a spotted pattern. Carol saw this and wanted more of those kittens, hence the breeding of pixie-bob cats began.

Pixiebobs are considered to be the most loyal of cats and some might even compare their loyalty traits to those of dogs. These cats enjoy human company, are gentle and quiet creatures that even get along well with kids and dogs in the same home. You can play fetch with them or have them on a leash, a Pixiebob will always be grateful for the time you give it.

This cat will definitely get involved in birthday parties and all events held in the house. It makes unique noises like chirps and even chitters. Having a few toys around the house will keep the cat not only entertained but also stimulate its intelligent mind. We recommend throwing in some puzzles to bewilder and also amuse these sophisticated creatures. 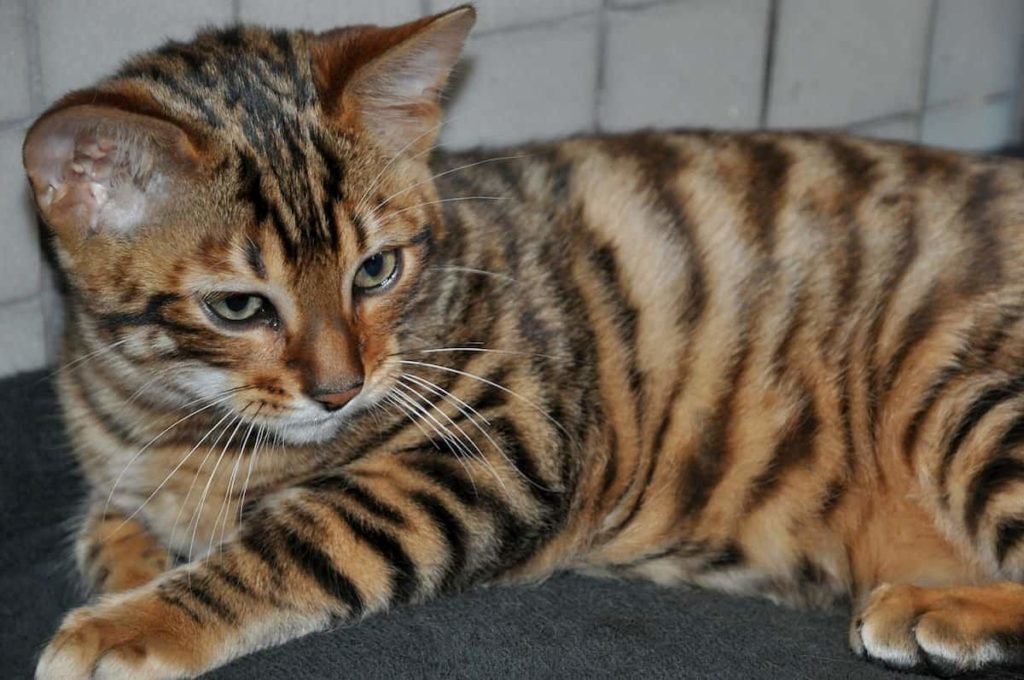 Bobcats are exquisite looking medium-sized cats found in North America. Bobcats were discovered in the wild and are said to be roaming the Earth more than a million years ago.

The first incident of bobcats was known in 1805 when two red Indians were seen wearing a robe made from cat pelts. These cats were not given a name until in 1888, on paper a name was published “bobcat” which referred to those cats whose pelts were used for fur. That is how the name carried on.

Bobcats are twice the size of domestic pet cats and are great predators thus making them terrible house pets. They are adaptable to many different environments, from forests to swamps to rocky hills and everything in between. Although they are hunted mostly for their skin, bobcats are great hunters and manage to escape most human encounters. They hunt chickens, birds, rodents, deers, and more. The cat waits for its prey without moving a muscle until it feels it’s the right time to pounce on its victim and kill it instantly. These cats are said to be territorial and leave their markings everywhere which can be a bit of a no-no if you’re keeping them in your homes.

These cats are not like your ordinary domesticated felines. They require a proper diet and nutrition that will keep their muscles going. These cats are more active than usual and require a protein-based diet that is raw. Processed meats over a long period of time can have detrimental health impacts on the animal.

What Are the Common Types of Kratom Strains?

Siru: Create Your Own E-Wallet While Paying Online 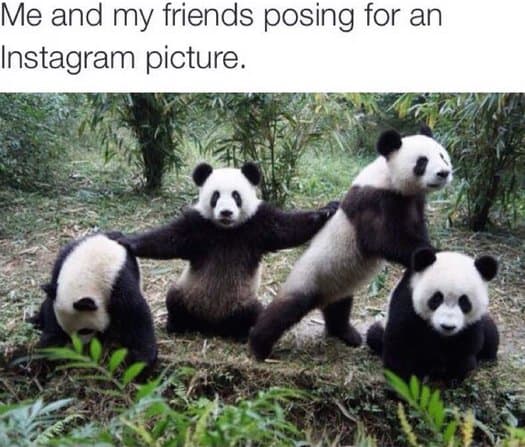 Read More
Pandas are one of those amazing animals of the world and their memes will makes you laugh with amazing cuteness. Here some panda memes makes you lough.
AAnimals 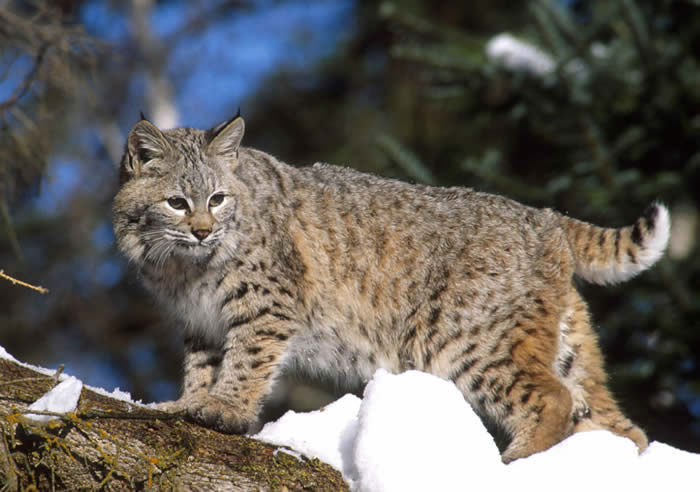