Have you seen the movie “The Sandlot”? If you did, you must be wondering about the dog called “The Beast”. That dog made a special place in people’s hearts; especially kids. In this article, we will discuss the sandlot dog breed. 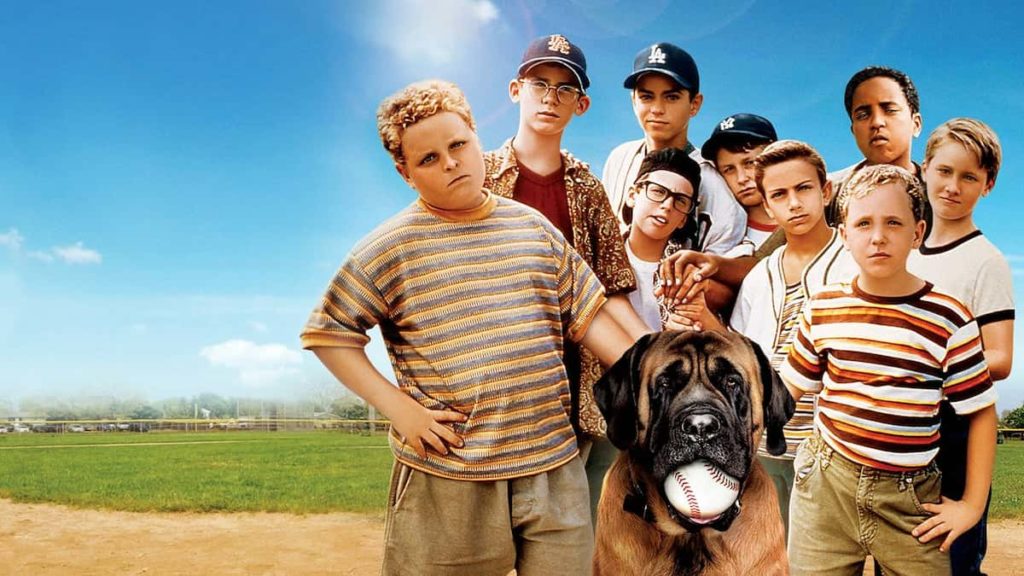 Before jumping directly to our discussion about the Sandlot dog breed, we should learn a bit more about the movie “The Sandlot” which made the dog so popular. Let’s begin.

The Sandlot was released in 1993. It was released with the title of “Sandlot Kids” in some countries. The film became so popular back in the days that it is still referred to as a cult film. This sports comedy grossed over 34 million USD worldwide! Here is some more info about this awesome film.

The director of The Sandlot is David Mickey Evans. He is also the narrator and the co-writer of this movie. The cast of this movie is Tom Guiry, Karen Allen, Mike Vitar, James Earl Jones, Denis Leary, Patrick Renna, and many more.

The Sandlot was filmed in Salt Lake City, Midvale, & Ogden, Utah. The story of the movie is set in Fernando Valley in Los Angeles, Canada.

The story is based on the summer of 1962. The story revolves around a 5th grader kid named Scott Smalls (Played by Tom Guiry) who moved to the suburbs of Los Angeles with his parents. He was having difficulties making new friends there and later joined a local group of boys who played baseball in a local sandlot.

Though Scott joined the group, he was often ridiculed by others as he was unable to catch or throw a ball properly. But later Scott was invited to join the team by Benny Rodriguez, the leader of the team. Benny mentored Scott to become better in baseball.

One day when the boys were playing, a kid hit a home run and the ball went into the adjacent backyard. Scott tries to get the ball back but the other kids stop him by warning him about a ferocious dog. They referred to the dog as “the Beast”. According to them, the dog is very aggressive and will eat anything that goes near it. That’s why it’s always chained by its owner.

One day the boys were playing and they lost the only ball they had. So, Scott brings a ball from his dad’s trophy room not knowing that it was signed by legendary baseball player Babe Ruth. Scott then hit his first home run and the ball went to the lair of “the Beast”. After knowing the value of the ball, the kids decide to retrieve it from the beast.

The boys tried to get the ball several times but failed. Later Benny tries to retrieve the ball and “the Beast” breaks the chain and chases him through the town which results in many comedic situations. In one moment of this pursuit, the dog crashes into a fence. Benny and Scott help the dog by lifting the fence. Then they met its owner who was a former baseball player and used to play with the legendary baseball player Babe Ruth. They also get to know the real name of “the Beast” which was “Hercules”. Later they become very friendly with Hercules as the dog actually was very friendly. If you want to know what happens next, go watch the movie. 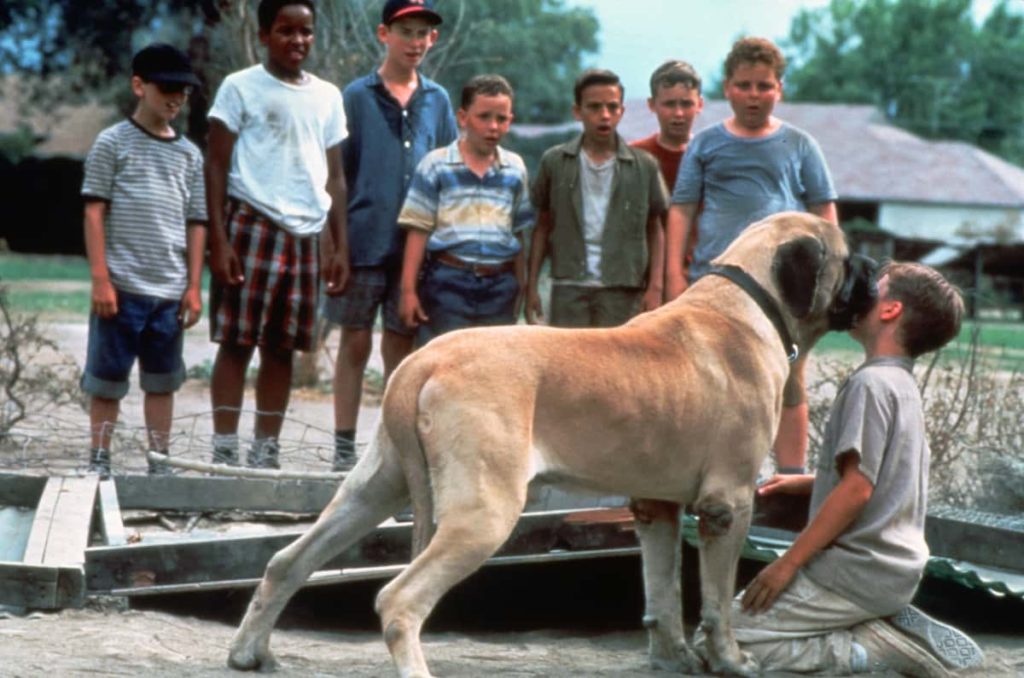 Things To Know About The Sandlot Dog Breed – English Mastiff

As I’ve mentioned before, the English Mastiff is a pretty huge dog. It has a large body and a broad skull. Their head looks kinda square in appearance.

A male can weigh around 150-250 pounds and a typical female English Mastiff weighs around 120-200 pounds. There are also some individuals who grew more than 300 pounds.

The English Mastiff or the Sandlot dog breed has a short coat, a limited range of colors, and a black mask. Various kennel clubs have described the color of this dog breed differently. According to them, these dogs can be of fawn or apricot, fawn being the light silver shade or a bit golden yellow and apricot being slightly reddish. It has a very limited range of colors.

The English Mastiff or the Sandlot dog breed is a noble kind of dog as you can also see in the movie. They are extremely cool-headed. They don’t get offended by small dogs even when they bite them. They let small children play with them.

The English Mastiff dog or for some of you the “Sandlot dog breed” is a great combination of grandeur, power and nobility. They are such generous creatures that many often refer to them as the noblest dog breed.

Taking Care Of Your English Mastiff 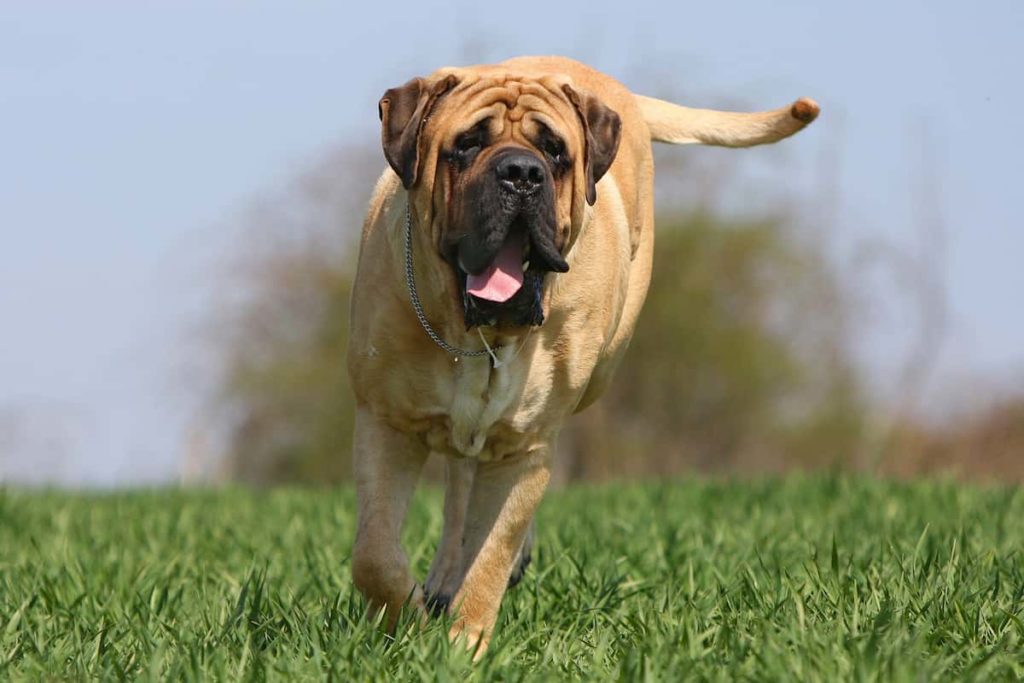 From a pup to a full-grown dog, English Mastiffs show their characteristics of movement, sound, and massiveness. As they are large in size, they need the correct diet and exercise to stay healthy and fit. This breed of dogs should not run too much in their first two years. Excessive running can put a lot of strain on the growth plates and can damage them severely.

Though excessive running is prohibited for the Sandlot dog breed/English Mastiffs, they need to exercise regularly throughout their whole life to avoid unwanted health problems and slothful behaviors.

The place where the dog will sleep should be soft and comfy as lying on a hard surface can develop hygroma, arthritis, and calluses due to their heavyweight!

An English Mastiff’s average lifespan is about seven years but it’s not uncommon for them to live 10-11 years. The most common and major health problems that an English Mastiff suffers from are gastric torsion and hip dysplasia. That’s why experts suggest you undergo a few tests for thyroid, elbow dysplasia, and hip dysplasia when buying a purebred Mastiff.

Now let’s talk about the food habits of these gentle giants.

How much food your dog needs depends on its age, size, build, activity level, and metabolism. As a large breed, the English Mastiff often takes 6-10 cups of dry food per day. But if you want to keep your dog on a raw diet, you’ll need 2.5-2.7 pounds of solid meat daily along with organ meat and bones. Nursing mothers and growing puppies may have a high food consumption. On the other hand, senior dogs generally consume less food. Keep in mind, just like people, dogs are individuals. So how much food they will eat will surely vary from one dog to another.

Your dog should be fed 2-3 times a day instead of a large meal as one large meal can increase gastric torsion (also known as bloat). So, you’ve to be careful about how you feed them.

The food habits of English Mastiff Great Dane mix dogs are almost the same as the English Mastiff dogs. You should give them 6-10 cups of dry foods per day divided into 2-3 meals. Try to give them high-quality canned food to bring variety to their diet.

Mastidanes are smart and easy to train. They can pick up training routines quickly. As these dogs are obedient, they love to follow their owner’s command in their training regiment.

Just like the Sandlot dog breed, Mastidane or English Mastiff Great Dane mix dogs live around 8-12 years and are very gentle in nature. Having them in your house will give you a vibe of having a person around. They are not the kind of pet that can fit inside your palm. But you’ll surely love them for their gentle and friendly behavior. 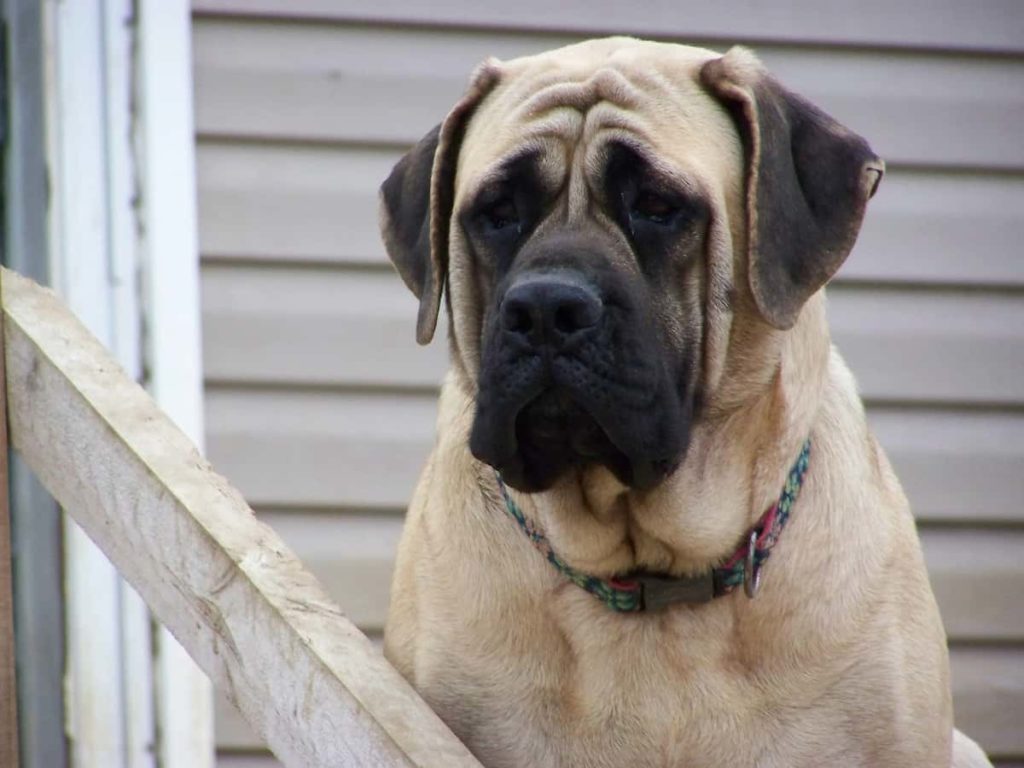 The Bullmastiff is a crossbreed between the English Mastiff and The English Bulldog. This dog breed was officially recognized in the early -1930s in the US. The Bullmastiff dog breed is very courageous and smart. Thus they have the nickname “The Gamekeeper’s Night Dog”.

As we are talking about pet dogs today, it’s time for our honorable mention. Let’s talk about the mini hippo dog.

Mini hippo dog is a crossbreed between a Chinese Shar-Pei and a purebred Cocker Spaniel. As the name suggests, they are small in size. They don’t take much space, are fond of playing with kids, and have a very cool temper. All of these characteristics make them perfect as pets.

Getting a pet dog sounds easy and fun. But the truth is that they come with plenty of responsibilities. Whether you are interested in getting a large dog like the Sandlot dog breed or a smaller breed like the Mini Hippo dog, you have to take proper care of them.

Five Loan Options To Get You Out Of A Jam

A Simple and Informative Guide to Business Branding 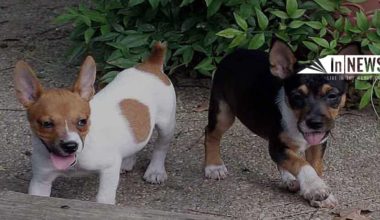